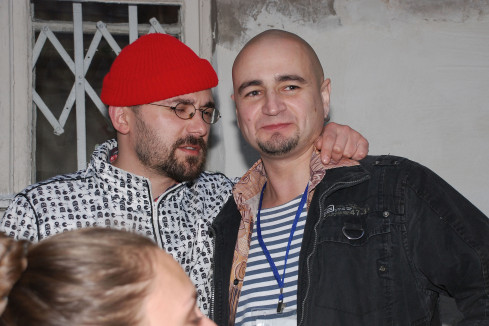 Polezhaka studied to be an architect and once was an active member of the Club of Funny and Inventive (KVK) in Kharkiv. He broke onto the literary scene of 2000s as a successful slam poet. His satirical verses appeal to a wide audience, while his public activism has made him truly popular among Ukrainians. Since the beginning of Russian aggression in Eastern Ukraine, the young author has regularly joined various “art-forces” to perform for the military at the front. His poem “Reportage” (“Mister Kiseliov, it’s scary in Kyiv...”) has become an unofficial satirical hymn of Euromaidan. Polezhaka is the author of two poetry collections Stikhi o zhyzni and Frantic Poems. In 2011, he released an album Summer, Love, Polezhaka in collaboration with the band “Barabas”, but after the tour around Ukraine the band voluntarily broke up. However, Polezhaka’s poems have been turned into songs by many Ukrainian bands. The author has received Oles’ Ulianenko International Literary Award for his porno-poem “Jenna”. He is also the winner of the contest “Stop censorship – 2014”.

Semesiuk is Ukrainian artist, writer, poet, musician and cultural figure. He studied to be a sculptor but became a cultural revolutionary. In 2008-2013 he led the art formation known as the Union of Free Artists that developed the art-cultural project Zhlob-Art which gained a lot of publicity. Semesiuk is considered to be one of the Zhlob-Art founders who thoroughly recorded and researched the social phenomenon of zhlob mentality. Since the beginning of Ukraine’s Revolution of Dignity, he was an active member of “Mystetskyi Barbakan” – a space for creative revolutionaries. In 2016, he formed a band “Pyriatyn” that released its first album in 2018. Luta Sprava Publishing House has released both Semesiuk’s books – experimental work The Diary of Ukraine Eater (2014) about Agroelfs and Orcofinns in imaginary Heavenly Dnipro Empire and Evolution or Death! The Adventures of Baboon Thomas (2015) that won Oles’ Ulianenko Literary Award. This book is dedicated solely to Ukrainian cultural codes and phobias. The author states that it falls into category of agromystical realism.