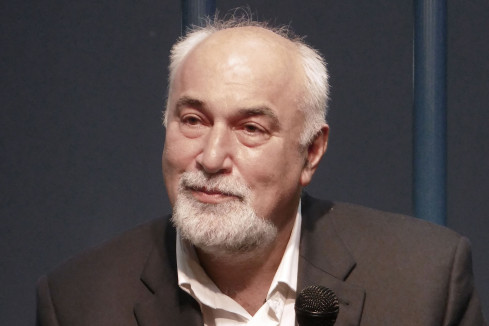 Born in Craiova in 1958 to an Armenian family, Varujan Vosganian studied economics and mathematics at Bucharest University. He is the president of the Association of Armenians in Romania and a senator for the National Liberal Party. He has served as the minister of economy and finance multiple times and currently presides the Writers’ Union of Romania. His poetry work includes the collections Ochiul alb al reginei (The White Eye of the Queen) and Isus cu o mie de braţe (Jesus with a Thousand Arms), as well as an autobiographical lyrical poetry book titled Cartea poemelor mele nescrise (The Book of my Unwritten Poems). He also writes prose such as the novel Statuia Comandorului (The Statue of Commander), in which he depicts the suffering and despair of Romanians living under a totalitarian regime, and the world-famous historical novel Cartea şoaptelor (The Book of Whispers), a captivating saga of the Armenian people in Turkey, Armenia and Romania throughout the 20th century.